There were a few months when our little guy would get so fussy that he was not capable to go sleep at night. We knew he was so tired, so why wouldn't he just friggin' sleep!? This was the source of many tears for this mama and Pat saved me many times from a mental breakdown. Bedtime became known as "the witching hour" in our house.  I would have serious anxiety about bedtime, honestly dreading it.

After returning to work, my co-worker, also a first time mom, told me that she put her son down at 6 pm, no no exceptions. She is Korean, so at first I thought this was her "Dragon Mom" ways. But as our crazy nights continued, I thought she may be on to something. So, after trying so many things, we thought we would give it a go. We swaddled Bear nice and tight right at 6 pm, made sure he was good and fed and rocked him a little bit. His little eyes got heavy immediately and he was out like a light. We haven't looked back since.
I have been trying really hard to create a routine for him. It goes like this:


He is mostly at the stage where I can put him in his crib while he is still awake and he is able to fall asleep on his own. Most the time.

But here is the hard part, we miss him. 3 out of 4 days Pat doesn't get to see him at all because he doesn't get home from work until after 6:30pm and leaves before he is awake. I try to keep our little guy up without reaching the point of no return, but it's no use. The fussing starts, the rubbing of the eyes - all the clear signs of baby exhaustion.

This makes me wonder, however, were we ignoring these signs when he was younger?


Regardless, this new bedtime makes life less stressful on all of us. Bear fusses less and Pat and I get our alone time, even if that means folding laundry and doing dishes.

And then, in the morning, Bear looks at us like this: 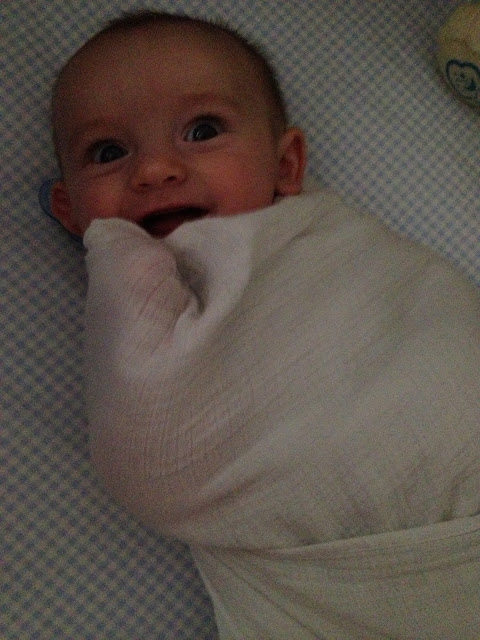