... In Winslow, AZ. You know the song. But did you know Winslow has a festival, just for being mentioned in a song? Well, They do! My favorite neighbors have a mobile pizza oven and were signed up to be vendors for the Festival. And I signed up to help them! 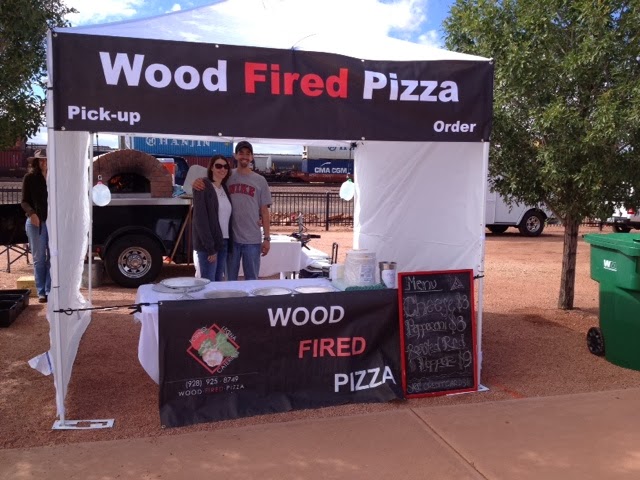 Thursday night after work, Bear and I jumped into Neighbor J's Ford and we headed off into the sunset to Winslow. We were headed for a weekend of pizza, madness and cooler weather.

The two babes slept soundly in the backseat with me until we hit some silly potholes about an hour outside of our destination. Do you want to know a fun car activity? Sing "The Wheels on the Bus" over and over and over and over and over... It is the only song to calm my little guy. Little M wasn't soothed... or she was singing along... who's to know?

After a restless night of sleep in a new place, we were up with the sun and headed to set up the pizza oven. The babes stayed behind with Little M's grandma, Mrs. C., and they were SPOILED with toys! Bear has never seen so many colorful toys in his life! I knew he was in good hands. Our hosts are the kind of people that want to take care of you. That are happy to clean up your messes and happy to cook every meal and clean up the dog poop in the back bedroom that your dog may or may not have left for you to step in. I stepped in it. It went in between my toes. Mrs. C. wiped my foot off while I stood on one foot holding Bear all the while. They are the hosts that have lived in this teeny town their whole lives and can tell you the history and the gossip all in the same breath. I was in heaven.


The Festival was less than I expected, but we all know how I am with my expectations. There were not many vendors, but we lucked out by being stationed by the beer garden. What goes better with beer than pizza? There was live music playing most of the time and we had lots of repeat customers. It was fun getting to know the folks of this little town. Even the crazy lady who threatened me with "meeting [my] maker" because I wouldn't give her a piece of pizza. Tip: You catch more flies with honey than vinegar toots.

Joe slung dough, while Pat turned the pizza in the oven. Joe's sister was the prep gal and J and I worked the "front of the house" by taking orders and moola. We danced in the dirt to the music - interpretive dancing mostly, our backs hurt, there was literally blood, sweat and tears. (The tears came from the deliriously tired laughter late at night). I climbed fences with buckets full of pizza dough (Shout out to the hippies that helped me with that- we gave them a free pizza). My dear neighbors made a name for themselves, and I had one of the best weekends of my life.


Sunday morning we all sat in the living room of our gracious hosts and drank coffee, reminisced about the weekend. I hope that I will be invited to help them again next year! 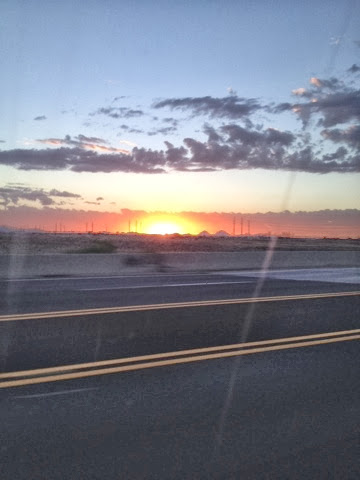 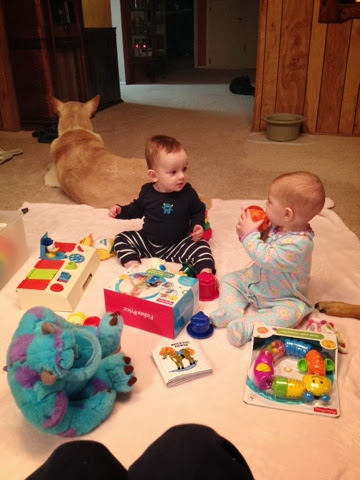 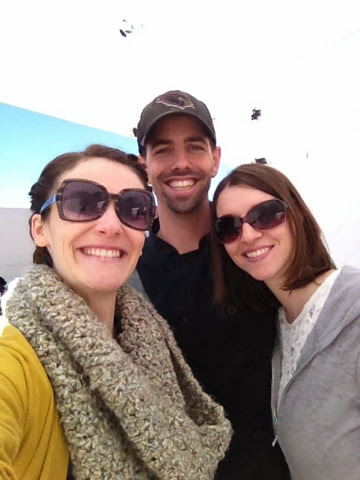 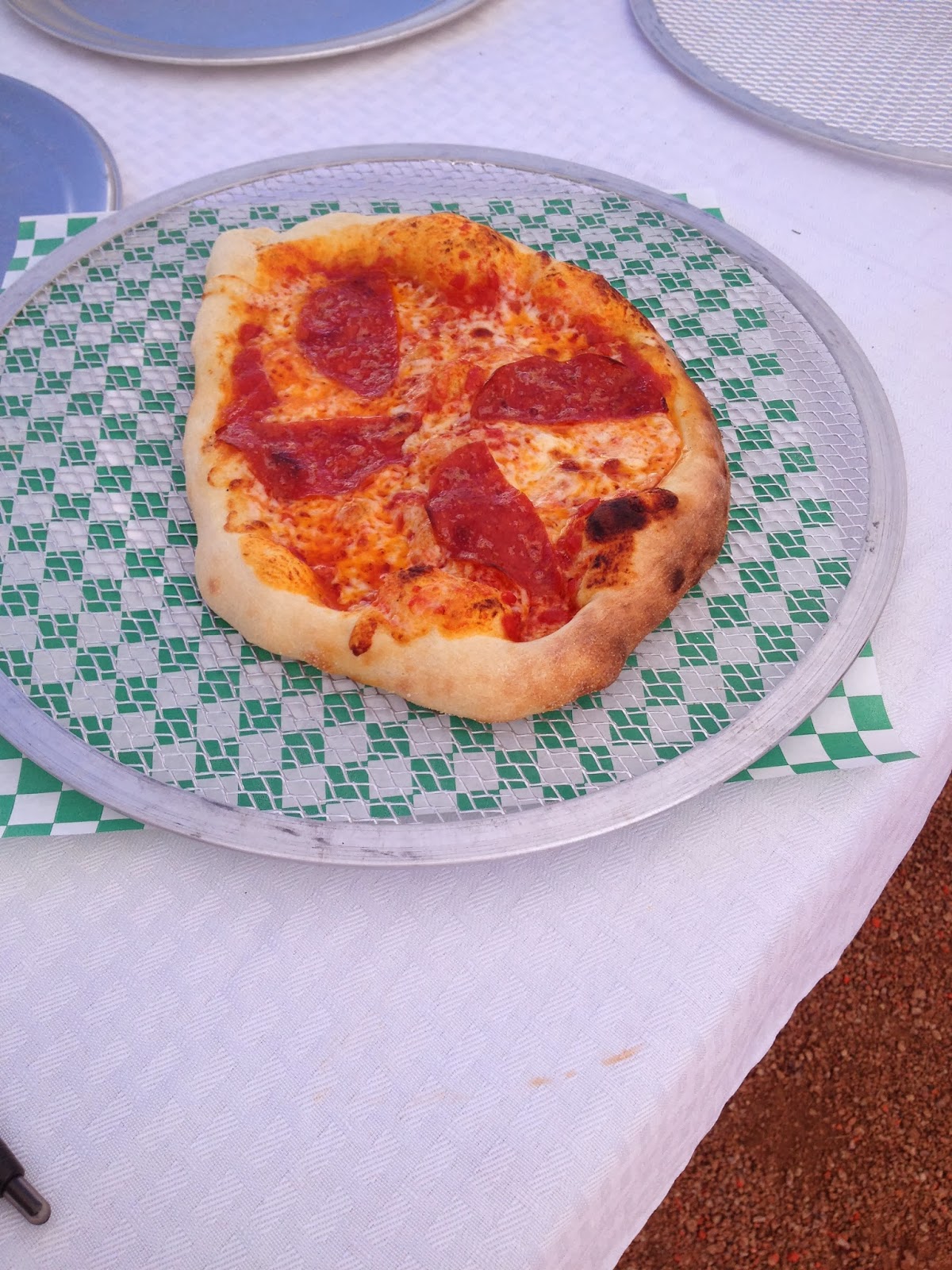 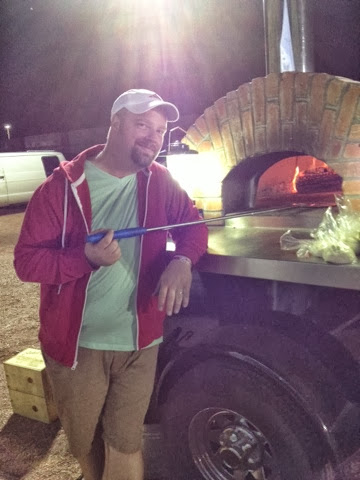 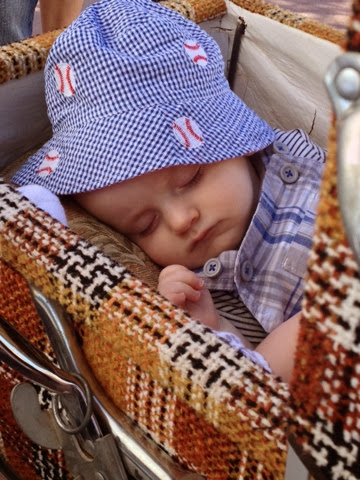